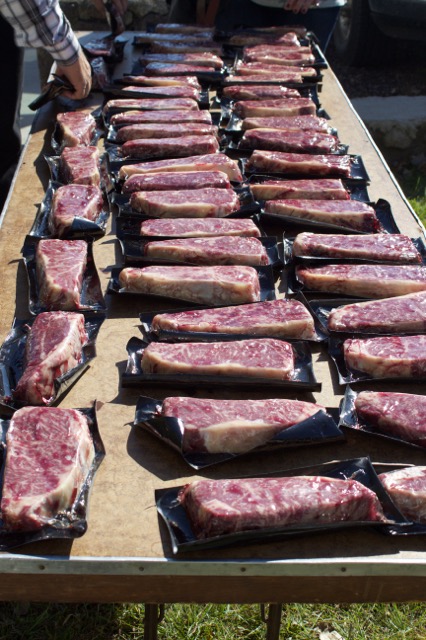 Jim Nickeson of Big Stone City is convinced Prime 360 Beef is a way to provide extra dollars on the table utilizing genetics for those in the cattle market.

“I think the point is we are leaving a lot of dollars on the table by not utilizing orime generating genetics,” he said.

As general manager of the company, he believes consumers will demand higher levels of marbling in beef in the future.

“This is a cattle phenotype (Prime 360 Beef) that appeals more to the commercial cattle man,” Nickeson said. “We’ve had phenomenal results from those who have bought bulls from us. Prime 360 Beef utilizes  North American beef breeds crossed with high marbling, maternal and polled 7/8 Japanese Reds, creating genetics that increase profit for cattlemen.” Rick Gruneich of Rochester, Minn., partners with Nickeson in the company. The two men have over 50 years of friendship between them.

Starting the field tour at Webster on Oct. 7, about 80 people viewed the animals with these genetics at Todd Vander Linden’s farm. The group walked along the pens to view more than 200 head of bred F1 50/50 heifers (all bred to Prime 360 Beef bulls), 80 head of embryo transplant daughters out of 7/8 Japanese donors (bred to various high marbling domestic bulls), 300+ head of heifers being finished,  and 50 head of May-born steers.

The second stop on the tour was at Josh Gaikowski’s feedlot where there are almost 500 head of F1 steers. Gaikowski noted these calves they don’t look like they are gaining but they show it on the scale. Those in the pen weigh around 1470 lb. and will be harvested in the next month. The first bunch went to market and was rated at 49.8 percent prime. Nickeson said the national rate for prime is 5.9 percent. “So we should have fed them a few weeks longer. The Japanese breed seems to need more maturity for the prime. Others we have sold have been at 80 percent prime and better the past two years.”

Nickeson is convinced there is a growing demand for more prime animals, especially with the newly-opened market in China.

“We won’t have enough cattle. When we ship animals over to China, the shipping costs are the same for choice as for prime so they’d rather have the prime. There is also a growing demand in the states.”

Donors have tight level floored udders as well as high fertility and excellent dispositions. These traits will provide two to four more years of longevity in the herd. Prime 360 Beef offers yearling bulls that are sired by Simmental, Angus and Red Angus out of 7/8 Japanese Red donors.

The finished cattle have received from 73 cents to $1.10 premiums over choice carcasses over the past two years. Prime 360 Beef plans to buy as many feeder calves at a premium as possible from their customers to grow these animals. At times that can mean an extra $600 to $1,000 per animal over choice.

Nickeson said the company markets the animals through two companies, a joint venture working in Texas and Florida and the other in Iowa. They have the markets for those who are looking for these cattle with the higher marbling. One of the companies pays a premium for those that are 70 percent prime or better. The other looks at “if they are bred alike and fed alike,” they buy the animals.

“I wanted to do something to get high marbling genetics in replacement females,” Nickeson said. “Many years down the road, if you have higher marbling carcass traits, you’ll be in the driver’s seat to make prime grading beef and to get a premium for it. It is in its own way a very good risk insurance policy without having to pay a premium.”

Kris Ringwall of the NDSU Extension Research Center from Dickinson, N.D., applauded those at the meeting for attempting to do things better and making things work. He said a lot of times at meetings there are slide shows of facts. But when it comes down to asking cattle people about the facts, they don’t know. Being able to look at costs and returns is an important part of being successful. The challenge for producers is knowing where they are at and how they are making money.

Dr. Boyd Bien of BovaGen, a full service embryo transplant clinic at Lake City, spoke briefly. He worked with Nickeson to use embryo transfer to mass produce offspring out of the top Japanese females. He said the heifers were some of the most productive he’s worked with. They were able to flush more than average numbers of embryos from each animal and flushed up to 15 times. The animals had little trouble in breeding back.

Some at the field day were there to look and learn. Others have purchased bulls and wanted to share their experiences.

Paul Olson of Forbes, N.D., said he’s looking at raising these animals as a great opportunity.   He bought three bulls from Nickeson this spring. With the company willing to buy back the calves with a premium is really enticing.

“I think the idea is moving forward,” said Brad Hein of Browns Valley, Minn., who has raised some of the beef. “My place is right along the highway so it’s easy for people to see the animals.  I’ve calved heifers out for Jim.  I’ve butchered some myself and shared meat with relatives. They were really happy with the beef.”

Richard Gross from Napoleon, N.D., purchased bulls from Nickeson five years ago. He started with the fullblood Akaushi bulls and now has switched to the Prime 360 bulls. “The calves seem thicker. Jim has helped find buyers for calves in the past and now he’s buying them and finishing them. We got a nice premium, we didn’t have to pay commission, and there were no discounts. That adds benefit for us.”

Driving up from Arcadia, Neb., Bryce Ritz has been raising certified grass-fed animals. To improve his herd, he bought four Prime 360 bulls with the first calves born next spring. He said the calves start small and chunky but finish out really well.  He said he’s built up a market for his grass-fed animals and people are interested in what the new bulls will bring to the herd.  Since he’s in Nebraska, he’ll do the marketing of the animals he raises.

At the end of the tour, Nickeson said they wanted everyone to taste the prime steaks from Prime 360 Beef.  The 16 oz.-New York strip steaks had been aged for 30-45 days. He said they grade 8+ on the Japanese scale of 1-12, which is above USDA prime beef.

“My goal is a legacy deal, not for Rick and me, but for a lot of young people, to get them involved and get them thinking about the importance of marbling,” he said. “That’s the future. Merging these young bright and capable producers together to enhance each other’s efforts is the end goal Rick and Jim have.”